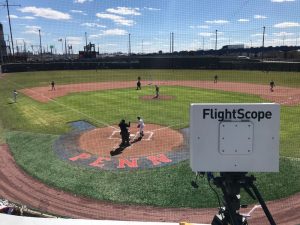 March 20th, 2019 Click here to read the full article on The Daily Pennsylvanian

In a time when a large number of collegiate programs around the country are fully committing to analytics, Penn baseball is following suit.

Now, as the first Ivy League squad armed with FlightScope Strike, a portable tracking radar system, the Quakers are beginning to gather more data than ever before. The machine has so far been utilized to track the hitters and pitchers in offseason practices, and it’s just starting to be used in games as well.

Pitching metrics such as horizontal and vertical break, spin rate, and revolutions along with hitting metrics such as launch angle, exit velocity, and carry distance are becoming increasingly important for improving player performance, and FlightScope Strike tracks all of these and more.

The FlightScope Strike machine uses Doppler radar to track the trajectory of pitched and batted balls. After each pitch, scores on all of the various metrics appear on a tablet included with the machine for the coaches to analyze in real time and give the players live feedback.

“It’s been helpful in letting our guys know their feedback immediately,” assistant coach Will Kaufman said.